Blush For Me by Kristen Proby 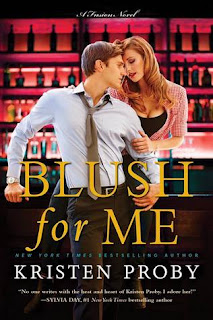 This series is a fun glimpse into the world of strong, independent, business minded women that love hard, protect each other, but like to end the day with good wine, food and the love of a strong man. Each time you get a little more invested with all of them. This one had Kat leading the story and she led it well.

Mac and Kat met in a stressful situation that landed them together for an extended amount of time, out of the daily grind they decided to an agreement that they would have their sexcation and nothing more….or….not.

The saying it’s a small world would sum this up, if Mac didn’t know where Kat worked. Having that knowledge set the stage for a meet…but what they didn’t know was they had been closer than they realized. I totally enjoyed these two together. The banter, friendship and the fact that they allowed each other to be themselves and still were able to find the balance to make their differences shine brighter. The strength of character they both possess makes it impossible to not fall hard for them. Add some drama, cocktails, sex times and a man that will hold back your hair. I’m sprung.

Can’t wait for more from these girls. Love catching up with them all.

Written by: unrulygirl
The Wright Brother by K.A. Linde
Cole by Tijan