The Cad And The Co-Ed by Penny Reid & L.H. Cosway 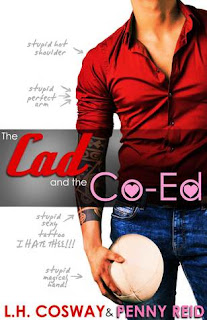 This story highlights that life’s mistakes can lead to some of it’s greatest treasures. Being a drunk that couldn’t remember day to day events was the lifestyle that Bryan Leech had led for years. This tidbit of information was not known to the young cousin of Bryan’s teammate who had a major crush on the rugby star and jumped at the chance to spend a life altering night with him. This decision not only led her to a new life, it eventually forced her back to secure a future she never thought she would have.

I enjoyed this installment of the series. Every time I read one of these it takes me a second to remember the playbook, to line-up the who is who from each past story and what events that these characters may have played in a previous story. It takes a second but before I know it I am once again entrenched in every arsehole and who they belong to.

These two authors work so well together that they seamlessly weave their writing styles, humor and point of view in a way that you forget it’s a co-written series. Can’t wait for more from this crew and to draw the lines from the who is who for the next book.

Written by: unrulygirl
Fake Fiancee by Ilsa Madden-Mills
If You Were Mine by Melanie Harlow