From This Moment by Melanie Harlow 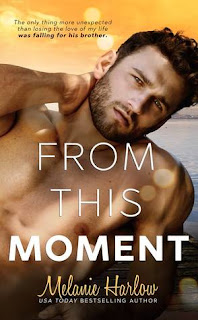 I always know I am going to get something emotional, addicting and all consuming when I start a Melanie Harlow book, but this one took the cake. It was a romance of unspoken nature…but what I did learn or think on hard was judging things I know nothing about. It was a lesson in realizing that not everything placed in front of you can be deemed right or wrong. I have always known if you don’t walk in their shoes don’t judge them. This was that case.

From the outside looking in this was a romance that would be judged harshly, but when you get to the real story, the fact that Drew always stole the show while Wes allowed him to. When you learn who loved whom first, you start hoping. Hoping that Wes can get the happily ever after he has let everyone else have. That he can put himself and his happiness first. But the one thing he wants has so many strings attached. The relationship that Hannah has with her mother in law was SO familiar, lol. She was all things I understand. After 23 years with my husband and giving 4 grandbabies, I still struggle to be enough. This book was so personal, raw in a way that had you invested in what was going to happen. Forbidden, but right.

Written by: unrulygirl
In Pieces by Danielle Pearl
Ruthless King by Meghan March