The Wright Boss by KA Linde 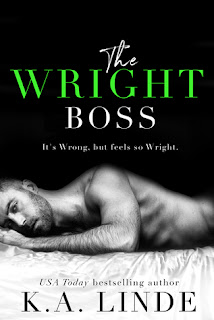 Back to the land of the Wright Brothers…this trip brings us Landon, his dipshit of money grubbing wife and Heidi, the woman that truly loves him for who he is not what he has or doesn’t.

I have enjoyed both brothers thus far, but they have both possessed a quality that doesn’t completely connect with me. For this round, Landon’s “door-mattness” was a bit of a turn off for me. At one point in the story he made a choice that I did not understand at all! Even when the reasons behind him staying were revealed they didn’t rectify my complete disappointment in him.

What I did enjoy was Heidi, I felt her to be real, relate-able and honest. She never wavered in what she believed and was strong enough to endure the wishy washness of Landon’s indecisiveness. It didn’t make her weaker for me, it drew me and made me root for her happily ever after. As always I am excited to dive back into this family on the next go-around!